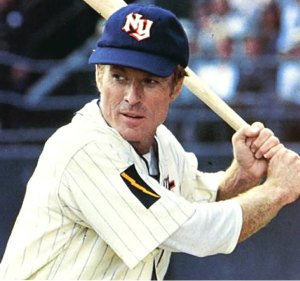 Robert Redford as Roy Hobbs in ‘The Natural’

As fall turns toward winter I always start watching more movies, both at theaters and at home. At the same time, I’m in withdrawal since there’s no baseball to watch and the Giants’ off-season looks to be pretty quiet, so I started recalling my favorite baseball movies…especially since I’ll probably be watching many of these yet again in the coming weeks as I await the start of spring training.

I’ve seen dozens of lists of top 10 baseball movies and top 10 sports movies over the years, and usually have disagreed with them (as you no doubt will with mine – and you can vote on your favorite below)…but I don’t think I’ve ever actually done one. My list stretches to 15, but who’s counting? END_OF_DOCUMENT_TOKEN_TO_BE_REPLACED

There’s been a lot of criticism among the sportswriting community about the new movie “Moneyball,” based on the best-selling book of the same name by Michael Lewis chronicling the 2002 Oakland A’s and how they changed their approach to building a team after being gutted by the loss of key free agents to big-market teams after the 2001 playoffs. Much of the criticism is levied at the factual basis of the movie. Several columns I’ve seen have picked apart what’s true and what’s not in the movie, railed against the portrayals of certain characters, and generally criticized the fact that this is a movie to begin with.

That’s true among some of the diehard fan base as well. One friend of mine – a lifelong baseball fan like I am – said he couldn’t understand why this was a movie to begin with. The A’s didn’t even make it the World Series, he reasoned. This could be about ANY team that tried and failed. He missed the point of the movie, but then again he hasn’t seen it, or even read the book. This is a story about thinking differently, bucking the odds, sticking to your guns, and believing in what you’re doing when nobody else does.

I agree with some of the critiques of the movie if you solely compare it to the real story of the 2002 A’s and pick apart everything that doesn’t stack up. There’s barely a mention of 2002 A.L. MVP Miguel Tejada or Cy Young Award winer Barry Zito, or the two other star pitchers, Tim Hudson and Mark Mulder. Chad Bradford is made out to be the ace of the bullpen when in fact he was an effective if unspectacular reliever. Certain player trades and signings have been changed a bit to fit the broader story. And the portrayal of manager Art Howe is about as off-base as any fact-based character portrayal in recent memory. The real Art Howe – a tall, slender, tanned, and affable longtime big league player and scout who managed the A’s at their most recent heights in the late 1990s-early 2000s – was and is nothing like the pasty, schlumpy, grouchy and pretty selfish character played by Philip Seymour Hoffman. I knew Art Howe back in the 1990s, when he was a scout for the Dodgers organization and I was working in their minor league system. He’s a great guy. But the character Hoffman plays makes a great foil for Beane in the film, as does the Grady Fuson character who clearly is also a dramatization to a certain extent. END_OF_DOCUMENT_TOKEN_TO_BE_REPLACED