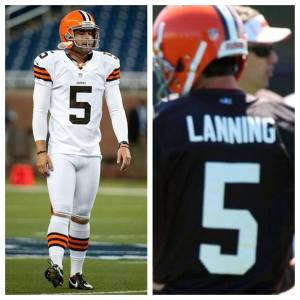 As I wrote about last year, three Lannings have played Major League Baseball (the last retired in 1947), and I’ve had a fun time over the years tracking down artifacts and history of those long-lost ballplayers and linking them to my family tree. In fact, not too long ago I finally found a photo of Lester “Red” Lanning from his college days as a baseball star at Wesleyan University in Connecticut, before his short-lived career in the majors. However, there’s never been a Lanning in the NFL (or NBA, or NHL)…until now. END_OF_DOCUMENT_TOKEN_TO_BE_REPLACED

As a lifelong collector and longtime genealogy lover, one of my favorite hobbies since the advent of eBay has been to find trinkets up for auction that might have some relevance to my family history, then actually be able to make a connection.  This hasn’t happened too often (Johnny Lanning’s autograph was one of the first), but when it does it’s well worth the time and whatever the small cost of the item. 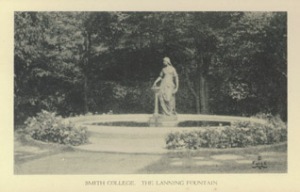 The old postcard that started the search…

Years ago I came across an old postcard on eBay of the Mary Lanning Fountain at Smith College in Northampton, Massachusetts, a town I used to hang out in a bit when I was in grad school in nearby Amherst, oblivious to the existence of the fountain at the time. It turns out various generations of this postcard are readily available on the site on an ongoing basis. However, I knew nothing about the origins of the fountain or who Mary Lanning was, so I bought the card and filed it away as one of my “future projects.” END_OF_DOCUMENT_TOKEN_TO_BE_REPLACED

There’s something very addictive about genealogy: the work is never done, but every discovery just whets the appetite for more.  As a lover of history, the thrill of finding a long-lost photo of a relative from generations before, or of uncovering a story about someone on your tree that brings that person to life…those are the things that keep stoking the coals for me. And every time I think I’ve hit a dead end, once and for all, on a particular line…something new pops up, one way or another. 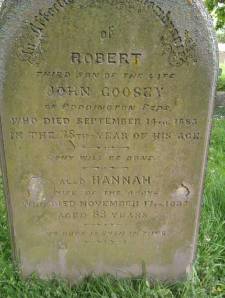 This headstone told me that my third great grandfather Robert Goosey’s father was named John, and that Robert had two older brothers.

I was laughing at myself a couple weeks back when I got SO excited over a photo I found on a British website, the Billion Graves Project. It’s a headstone. Yes, I got excited over a headstone. But it was for Robert and Hannah Goosey, a couple (one set of my thrice-great grandparents on my mother’s side) who represented one of those proverbial dead ends for me. I’ve been stuck trying to research that line for a long time now. Finding that headstone not only confirmed information I already had and added a bit of character to the data, it also gave me a new lead. Robert is listed on the headstone as the third son of his father John…so now I know he had two older brothers, and I know his father’s name…clues I can work with.

While I think getting much further on this will require a visit to England (a goal of mine anyway), this discovery just renewed my desire to research every source I can find to try to put some more meat on the bones of this latest discovery.  END_OF_DOCUMENT_TOKEN_TO_BE_REPLACED

I first learned about a pitcher named Johnny Lanning back in the early 1990s when I started “managing” a fantasy team of old-time baseball players in something called “Bill James Classic Baseball” as a hobby my buddy Steve got me into when we were both working in the front office of the Albuquerque Dukes, then the Triple A affiliate to the Los Angeles Dodgers.  This was before the internet, and long before social media. Like with current fantasy baseball leagues, we had a salary cap and we drafted a full roster of players. The difference was that these players were all old-timers…players dating back to the very start of Major League Baseball in the 1800s. The games were played by some computer in Illinois, and we anxiously awaited printouts in the mail each week of the prior week’s box scores and stats. 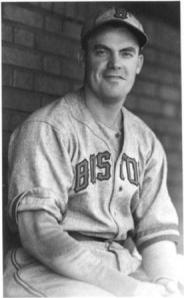 “Tobacco Chewin’ Johnny” was a journeyman hurler with the Boston Bees and Pittsburgh Pirates before heading off to WWII. He’s pictured here after returning to the majors with the Boston Braves.

It seems archaic now, and kind of bizarre, but it actually was great fun for a couple of guys fresh out of school, lifelong baseball fans working 80–hour weeks at the ballpark. We studied the history of the game regularly, learning about players and ballparks and historical comparisons between players from different eras. We were in a league facing off against each other and 10 other “owners” from all over the country, people who I came to know distantly through later generations of the game as it eventually moved to a web site and message boards, and in more recent years we started to find each other on other platforms like Facebook and LinkedIn.

While I haven’t gotten into a league in several years now (a different version of that same game still exists today, run by another company built by former BJCB players), I gained a lot more from that experience than a couple of mythical league championships (although as a lifelong Giants fan I do love the old-school fitted New York Giants cap I won as the league champion one year). I also gained greater appreciation for tons of players I knew little about in my childhood, including one who shared my last name: Johnny Lanning. END_OF_DOCUMENT_TOKEN_TO_BE_REPLACED